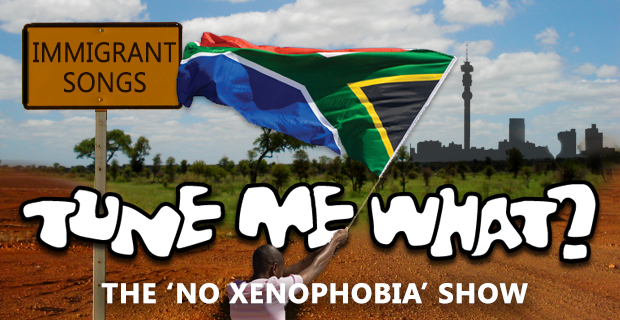 At Tune Me What? we wanted to add our voices to the protests against xenophobia and racism with a special programme devoted to playing those South African artists who are themselves immigrants and whose music now forms part of the rich tapestry of South African culture!

This week’s nasty racist attacks on immigrants in South Africa – the so-called “xenophobic violence” resulted in chilling echoes of the Cultural Boycott of the 1970s and 80s. Radio stations in Zambia stopped playing South African music and artists had their international tours called off. As understandable as it is that people in other countries want to send a message to South Africans – particularly those civic leaders behind inciting the violence and politicians reluctant and slow to act – it is grossly unfair that blameless artists are, once again, punished.

We think that it is fair to say that most South Africans deplore the attacks on refugees and immigrants from other countries in Africa who look to South and the outpouring of protest is heartening.

In this episode we CELEBRATE the music of:

Of course, there are a great many more musicians in South Africa who are immigrants themselves or the children of immigrants and our musical heritage wouldn’t be nearly as rich without them.